Watch this video of scholars just like you that practiced hard a took a chance. 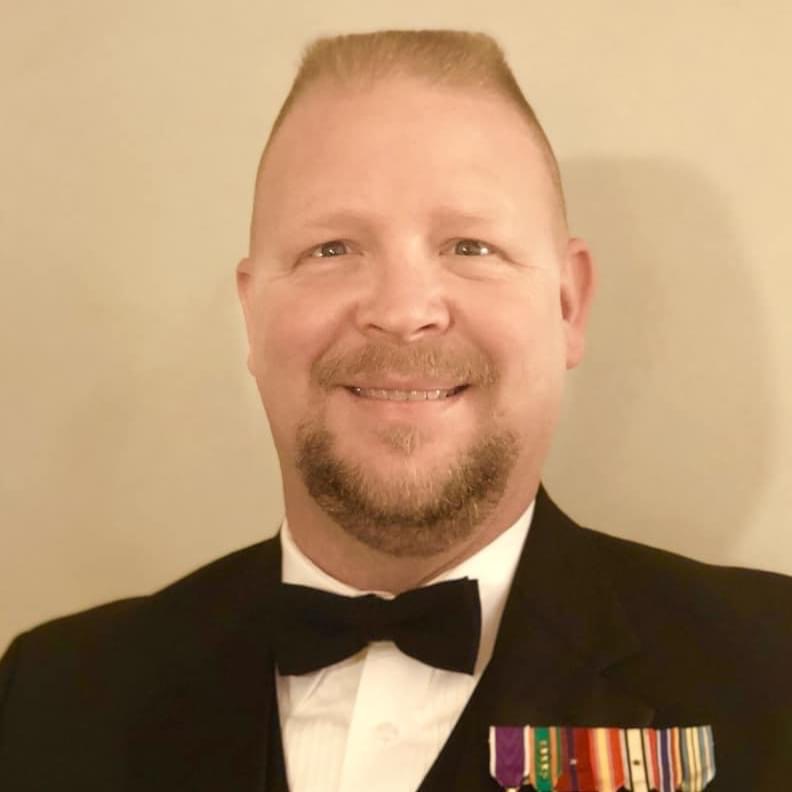 Michael is a born and raised Missourian. He grew up in House Springs and went to school in the Northwest R-1 School District graduating in 1988 from Northwest High School. After college and following five years of teaching K-12 vocal and instrumental music in Missouri (Mendon, Clarksville and St. James 1992-1997), Michael Maschmeier wanted to serve his country and perform professionally more frequently. The pride and music performance the Marine Corps Bands offered appealed to him. He enlisted in June 1997 then attended recruit training at Marine Corps Recruit Depot San Diego, California graduating Series Honor Man in August 1997.

Michael enjoyed a varied career and has traveled to 27 countries throughout the world while performing and doing combat operations. He served as euphonium and percussion instrumentalist with the Quantico Marine Band, Albany Marine Band, 1st Marine Division Band and the Commander Naval Forces Europe Band, Naples, Italy.

Michael began conducting as Acting Enlisted Conductor with the 1st Marine Division Band in late 2005.  He then deployed to Camp Fallujah Iraq with Headquarters Company, Regimental Combat Team 5, I MEF (Fwd) in support of Operation Iraqi Freedom 05-07, in July 2006. There he assumed duties as Platoon Sergeant and Convoy Commander of Hades Mobile, a multi-purpose security convoy leading 143 missions throughout the Al Anbar Provence. It was during this deployment he was awarded combat valor and the Purple Heart Medal.

Following redeployment to the states, then training at the School of Music, he became only the 12th Marine Musician to serve with the Navy NATO Band in Naples, Italy. He was selected as Enlisted Conductor (a Command Position) in February of 2009. He furthermore deployed as the Music Operations Coordinator aboard the Dutch ship HNLMS Johan de Witt (L801), the first non-American platform for the Africa Partnership Station missions spearheaded by the United States Navy. In this capacity, Michael coordinated with embassies of five African nations scheduling and playing in over 40 performances, doing several television and radio interviews and spearheaded several music, conducting and drum majoring workshops with African military and civilian bands and musicians. In addition, while on this float the ship passed over the 0/0 latitude/longitude lines below Ghana, and “Salmon” as Michael was named, endured the “ceremony” and became an Emerald Shellback.

Following moving back to the states and further advanced training at the School of Music, Michael began his first Marine Unit assignment as Enlisted Conductor with the 2D Marine Aircraft Wing Band in Cherry Point, North Carolina, in July of 2012. He then finished his career as Enlisted Conductor, performer and Unit Purchasing Officer for the U.S. Marine Corps Forces Reserve Band, New Orleans, Louisiana. His military decorations include the Purple Heart, 5 Navy Achievement Medals with 1 Combat Distinguishing Device and the Military Outstanding Volunteer Service Medal. Michael retired honorably from the Marine Corps on 30 June 2017.

This school year marks Michael’s second with the Riverview Gardens School District teaching at Westview Middle School. His musical training includes receiving his Master of Music degree in Wind Band Conducting, with specialties in composition and brass pedagogy, from Southern Illinois University Edwardsville (SIUE), Edwardsville Illinois, in May 2019.Here he assisted Dr. John Bell in teaching four semesters of conducting to undergrads and was Graduate Assistant for the Wind Ensemble and the University Band. He furthermore taught brass techniques in the absence of the instructor. His Bachelor of Science in Music Education (Euphonium Major, Low Brass Specialist with minor in Percussion) Degree is from Central Methodist College (now University), Sweeney Conservatory of Music, Fayette Missouri, graduating in May 1992. His military musical training includes the Unit Leader Course and Senior Musician Course at the Armed Forces School of Music in Norfolk, Virginia.

Michael is an active composer and arranger with his company Warrior Musician LLC. He is a Kiss Super-fan and collector, a recumbent cyclist and also enjoys woodworking. He holds memberships in the Marine Corps League, the Conductors Guild, Phi Mu Alpha Sinfonia (Professional Music Fraternity), Pi Kappa Lambda National Music Honor Society, The Honor Society of Phi Kappa Phi, National Association for Music Education, Missouri Bandmasters Association, Missouri Music Education Association, Riverview Gardens chapter of the National Educator’s Association and a member of the First United Methodist Church in O’Fallen IL. He is married (29 years) to the former Miss Rebecca Woods of Elsberry, MO and they have three grown children, a son in law, one granddaughter, two dogs and two Italian cats (but that’s another story).

We want this academic year to be a success! That means we all have expectations and responsibilities. We know virtual learning is different but we are hoping to make sure that we are actively working and learning together.

As the music courses at Westview are taught virtually (Band and Choir), they will be team taught by Mr. Berry and Mr. Maschmeier. Together they will teach music theory (understanding the notes, rhythms and the staff), music appreciation (introducing different types of music and showing how to analyze and listen for the many elements), music history (exploring the time periods and composers/performers of the past and present) and other general music subjects too numerous to name. They will often be on camera together, or if one is manning the board teaching, the other will be maintaining the computers insuring the students are engaged and chatted questions are answered. Once the lesson for the day is completed questions can be asked and discussed before the daily assignments will be given. Students will then have the remaining time to complete the assignment and can communicate with the teachers with additional questions. Question that arise after the class time can be emailed and will be answered as quickly as possible. Students will have until 9:00pm the following day to complete the assignment, but are encouraged to do it in the class period (Ex. Monday, Aug. 31st's class assignment given during the period will be due no later than (NLT) 9:00pm on Tuesday, Sept. 1st).

First and foremost, follow the directions of the teachers. Students are expected to be at their device and ready to be invited into the class at the class start time. Students will also have a daily survey to fill out at the start of the class that will also include the music question of the day taken from the material covered to that point. The question may be as simple as "What is your favorite band or musician." The survey will not only serve as a grade, but attendance as well. You are also expected to have your camera on and be visible to the teacher, while the teacher(s) are explaining the information for the day, or reviewing information from days past. THIS COURSE IS CUMLITIVE! which means information given will be built on for later instruction. In other words, if you don't remember what a staff is and what the line and space names are, you won't be able to name the types of notes when they are placed on the staff. Some assignments will be done on line, while others may require you to draw something. In those cases, you will be asked to take a picture of the sheet and email it to us for grading. Either way, you as the student will fully understand what to do to turn in the assignments. Don't worry, if arrangements need to be made, we are flexible and can and will provide options. The motto for our class will be "Semper Gumbi" which is semi Latin for Always Flexible. Lastly, the educators of music want you to have fun with music and they will help you do that every single day.

The best way to help your scholar is to insure they can be present at each and every class period at that your scholar does his or her daily assignments. Communication will be key to helping the teachers do their job. If there is any issues you feel need to be address, both teachers can be communicated with through phone calls, emails or in extreme cases a meeting either through zoom or in person.

All four members of the music team (both teachers, the scholar and the parent) must work together to help the scholar learn and enjoy music while in the virtual learning posture. It would be wonderful to have instruments to play and a class of singers to sing at school, but we all know that is not possible right now. We'll say it again, our motto for the class has got to be "Semper Gumbi" because we are all learning how to build a plane, while we're flying. So let's make the most out of our time together and learn about the huge subject that is music-together.